Jazz on the Avenue: Three Flights Up 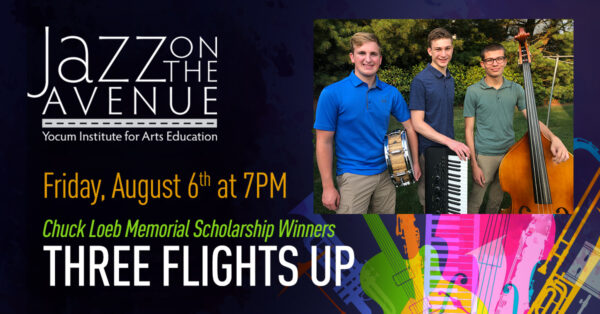 Each year, beginning in 2019, Berks Arts and Boscov’s Berks Jazz Fest awards the Chuck Loeb Memorial Scholarship to a local jazz ensemble made up of high school students.

Because of the postponement of last year’s 30th Anniversary festival, two winning combos have chances for public performances, in the 2021 Berks Jazz Fest and in a preview concert.

In 2020, Trading Four won the scholarship for the second straight year, including a financial award for further music education, and the opportunity to open concerts in the 30th anniversary Berks Jazz Fest on Aug. 13 and 18.

The 2021 winner, chosen after auditions on Feb. 23, is Three Flights Up, a jazz trio whose members are Costello, Nygard and drummer Aaron Rudderow, a Wilson High grad who will study audio engineering at Lebanon Valley College. Each member will receive $500 for music education, and the trio will perform at the Yocum Institute for Arts Education on Aug. 6, kicking off the restart of the monthly Jazz on the Avenue series.

As a spokesperson for both bands, Nygard said of the awards: “It’s a really big honor, not only the monetary part, but the ability to play in front of so many people. We’re so grateful to the RMF for administering this award.”

Nygard said the members of both bands met through county and regional school bands, festivals, and various RMF events. When Nygard was a sophomore, he and the other members founded Trading Four. Once two of the members left for college, Nygard and Costello started Three Flights Up with Ruderrow.

He said they had benefited from the workshops offered at Berks Jazz Fest over the years, and their attendance at the jazz jams there. They met saxophonist Albert Rivera, for whose Latin Jazz Band Trading Four will open on Aug. 14, at BJF, and all of them have attended the Litchfield Jazz Camp in Washington, CT, of which Rivera is director of operations.

Keri Shultz, president of the RMF, said: “Like with almost everything, the Chuck Loeb Ensemble Memorial Jazz Scholarship program looked different this year and last. However, the two things that remained constant are the dedication of our local jazz students, and Berks Arts’ commitment to ensuring them recognition and a performance outlet. The last years of recipients, Trading Four and their younger cousin, Three Flights Up, represent what makes our local music community special, as well as the quality of our area music teachers and school music programs.”

Chuck Loeb was a frequent performer and beloved creative force at Berks Jazz Fest for 20 years. He passed away in 2017 after a battle with cancer.

To honor and continue Chuck’s legacy, the Berks Arts Council and Boscov’s Berks Jazz Fest established the Chuck Loeb Memorial Scholarship Fund in 2018, which is being administered by the Reading Musical Foundation. Atonement Lutheran Church has generously provided space for the auditions.

Trading Four and The Bulldog Jazz Trio were selected for the scholarships after the RMF’s auditions on Feb. 23, at Atonement Lutheran Church, which generously provided space for the auditions.

“The scholarship program is a great way to honor Chuck’s memory,” said John Ernesto, Berks Jazz Fest general manager. “Chuck would be very pleased knowing we are continuing his legacy by giving back to jazz education, something that was very important to him.

“Chuck meant so much to me and the entire Berks Jazz Fest family. We all miss him terribly, especially this time of year. He left us with so many wonderful memories that we will cherish forever.”

“The teachers are really compassionate and take extra time to make sure you understand every step.””